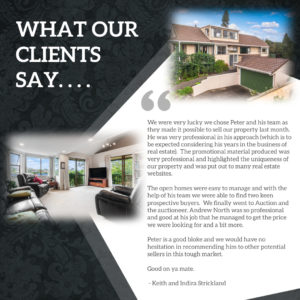 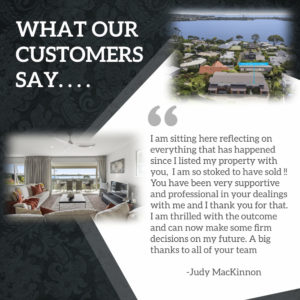 “We would like to extend this letter of appreciation to Harcourts Cooper &
Co’s Birkenhead branch for an outstanding job in the selling of our
property at 128 Rangatira Rd Birkdale especially Mr Peter Jones.
Peter’s tenaciousness to ensuring we had the best opportunity possible in
preparing the property for sale was nothing but sublime and to top it off
his customer service was incomparable, as he demonstrated his ability to
look after our needs in achieving an excellent outcome.
We have no hesitation in recommending Mr. Peter Jones and Harcourts
Cooper & Co’s Birkenhead branch to any prospective client and wish you all
the very best for your future.”

“Surprise and delight is how I would describe my dealings with Peter.
I had the pleasure of listing my property with Peter, a decision I’m so happy I made.
Peter went above and beyond my expectations in communication and professional marketing material.
He was upfront, honest and always did what he said he would do.
On my auction day, Peter had prepared me to make the big decisions.
If you are shopping around for a real estate professional, STOP and place your trust in Peter Jones!”

“My connection with Harcourts and Peter began when I sought a valuation appraisal of my property from Harcourts, one of three from different agencies, as I prepared for the sale of the property. Peter came to my home to make a presentation, bringing with him Andrew who would be the auctioneer of the property, should matters reach that stage. My partner and I were very impressed with them both. They looked through the house and took us through the steps they would take to effect a sale should we sign an agency agreement with them. They were both totally professional and struck us as being experienced and competent. We went through a similar process seeking appraisals from two other agencies to give us a comparison. Then we spent the next couple of months downsizing our possessions and preparing the property for sale. This proved to be an exhausting business.

When the time came to make a choice of an agent, we were agreed that Peter and Andrew, as a team, had been the most impressive and persuasive. At that stage we were about to go overseas for four weeks on a trip we had planned months before we ever thought of selling the house and moving. This seemed rather a conflict at the time; we ought to be here to oversee what was happening. However, Peter immediately suggested that of course we should go, he could arrange for the house to be “dressed”, and the open homes could happen while we were away. To us, this sounded quite perfect. The timing of our return would be just right for the auction.

So off we went. It was only once we were away that we realised how tired we were and how pleased and relieved we were that we were not there, that it was all happening in our absence. We duly returned reasonably refreshed and ready for the auction itself. In the meantime, Peter had followed up with the people who had attended the open homes, and kept in touch with us overseas with regular updates on the open homes, the number of people genuinely interested in the house, and any other matters, which he needed to speak to us about.

As result of Peter’s work in talking to people during the open homes and following up later on those contacts, we finished with four keen bidders at the auction itself, giving Andrew scope to work his magic. On the day before the auction we had a meeting with both Andrew and Peter to settle the reserve price and to talk though a few other matters, with Andrew giving advice on the amount of the reserve. We had been thinking about this ourselves and our ideas coincided with Andrew’s. So that was easily done.

The auction itself was a lively affair with Andrew establishing “relationships” with the individual people in the room, which was onsite, before commencing the bidding. We were learning that there is a lot of psychology in the conduct of an auction. In the end result, the bids exceeded the reserve, meaning we knew before the conclusion of the auction that it would result in a sale, a great relief to us, and, following 51 bids, we achieved a sum comfortably above the reserve. In all, through the efforts of both Peter and Andrew, we had a sale which we are satisfied was well within the market range for our property and which enabled us to proceed to the next stage of our lives as we had planned. We owe a great debt of thanks to both Peter and Andrew for their excellent work on our behalf.”

This site is powered by Graphic Detail Limited. Copyright 2016.